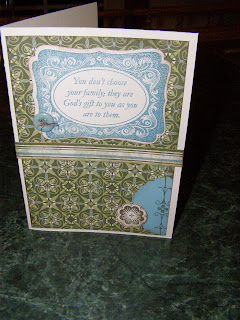 I am getting excited about scrap camp at Son-Life!  Only a couple of weeks away.  Michelle asked me to make a make& take so here it is.  Most of my best ideas are in the middle of the night when everyone's

sleeping.That is when I made this card.  Third shift syndrome! I used the creative basics Wings paper pack and the new stamp Family Love.  The buttons are cheaters. ( not CTMH) 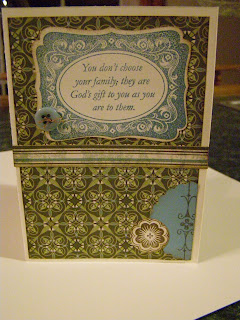 Here is another picture where you can read the words.  Also this paper pack is on sale in the while supplies last section for three dollars.  http://brendamckerchie.myctmh.com/
Posted by luv2srap at 1:05 PM No comments: 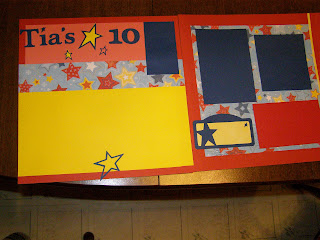 I used the Fanfare paper pack for this page.  It does not look the same with out the photos but the kids in the photo's are not mine and I was not sure about posting them.  The first page has 4 photos( three across the bottom and one small one at the top). I used the Art philosopy cartridge to cut the letters and stars.  I used my frine Tricia's trick so I did not have to keep looking up the letters in the book.  I put an overlay from another cartridge that has the letters on it.  Thanks Tricia for the tip! 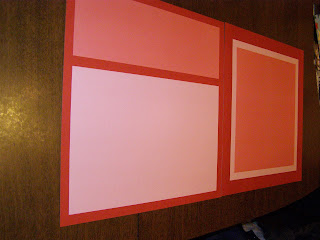 This is how my layout started.  I wanted to use up these two papers( They are from CTMH but not sure of the name) I am not a fan of Red and Pink but I covered up most of the pink and used these for the base.
Posted by luv2srap at 12:24 PM 1 comment: 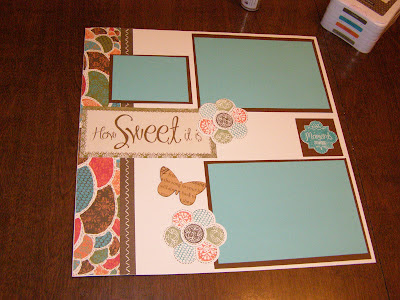 I got to use some of my new CTMH stuff today.  The paper pack is Stella.  I also used the new color-ready wooden shapes, and the complements stickease( they are made out of fabric)  At first I was not to sure what to do with this paper but I think I like the layout.  It works well with just a small piece that will not overwhelm the picture.  The stamps I used were Just for you, Stella workshop on the go, and Find your style.  I stamped the butterfly with the last set.  I can not wait to try some more crafting with this pack!
Posted by luv2srap at 5:18 AM No comments: 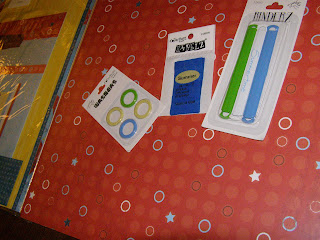 I Love CTMH products but I also love a good deal so I like to marry my CTMH stuff with stuff I have or got for a deal.  This layout was done with some Junkits embelishments that I was lucky enough to have won quite a long time ago.  I also used Fanefare paper pack and Cranberry ribbon.

I used the Binderz in the set to make a little matchbook album to put on my page.  First I cut a piece of cardstock a little wider than the pictures I want to include.  Then I score the bottom edge and on the top a little taller than the pictures.  You could measure it but I just eyed it using a picture.( Sorry Tricia I know this is not your way. :-) 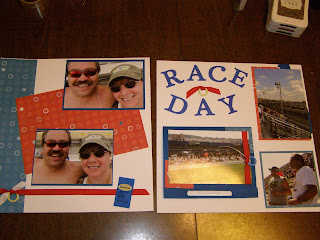 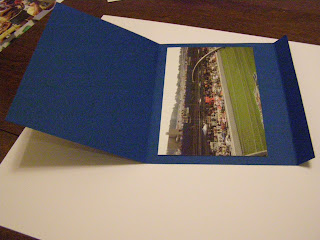 Next I cut the inserts a little smaller than the outside. 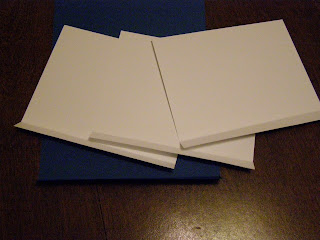 Then I seperated the Binderz and punched the two holes in the bottom flap.  Following that I punched two holes in all the inserts and thru the back of the matchbook.  I eyed up where I wanted the holes and used the first ones as a stencil for the rest. 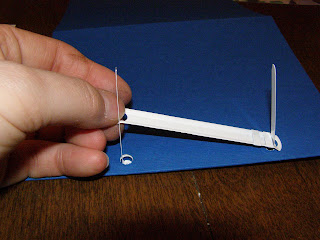 Next insert the Binderz thru the holes and put the back on.  Secure the clips. 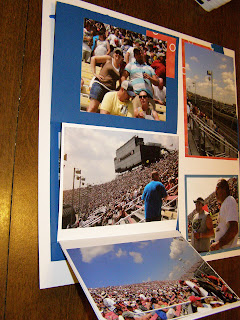 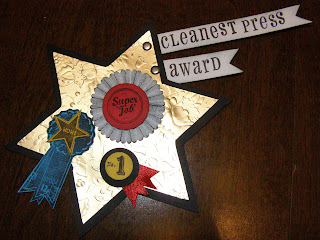 I made this as a joke for a friend at work.  He is always cleaning his press.  I did not use Close To My Heart paper because I am expecting this to be thrown away and I did not want to wast my paper.I used the blue ribbon stamp set.  I hope he gets a good laugh.
Posted by luv2srap at 6:21 AM 1 comment: 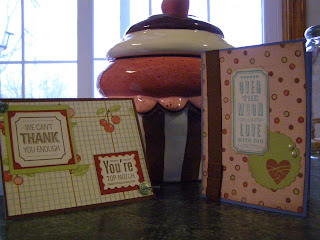 I used the Cherry-O paper pack for these two cards. 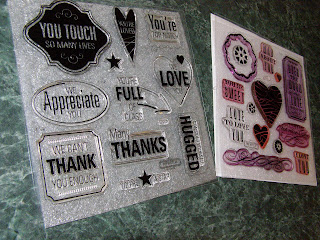 I also used last months stamp of the month, Mad About You, and this months Thoughtful Tidings.  As you can see the Mad About You stamp is well loved already at my house!
Posted by luv2srap at 12:21 PM No comments: 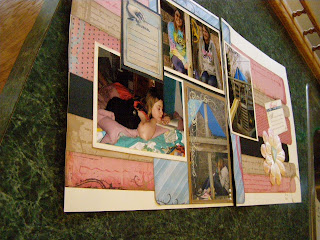 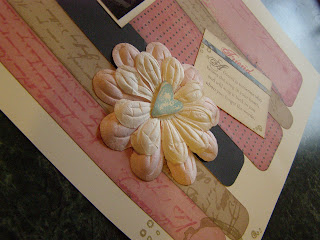 Lastly I used the Top Coats  overlays by Close To My Heart.( I got those for one dollar on the while supplies list!  I love getting deals. 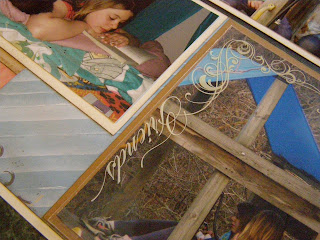 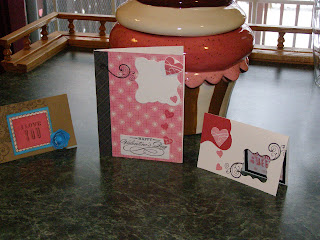 Happy valentines day!!!These cards were made with my sweetheart paper pack.  I love that paper and for three dollars I can not go wrong.  I also used last months stamp of the month Mad About You, and my Art Philosophy cartridge for my Cricut. 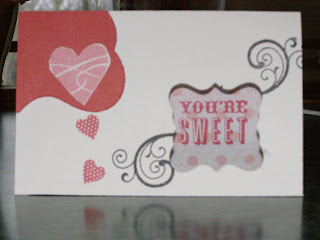 I cut this card out with the spellbinders die I won from Xron and the white die cut were cut with it also. 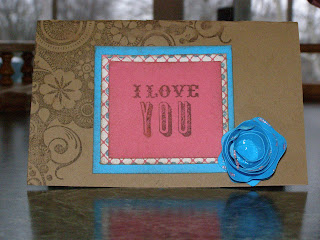 The paper behind the I love you and the brown flowers were made using the You Rock stamp set.  I might be getting the hang of this blog thing.  Got three pictures on today.  Have a wonderful Valentines day! 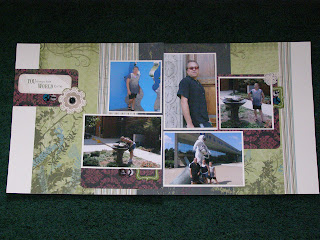 Here is my second post. So far so good.  I am a busy mom who loves to scrapbook and craft and would like to share the stuff I make.  I also work full time , have three children, two cats, a dog, and a puppy, so I can not post every day.  Nor can I craft every day.  :-(  This layout was done with the wings paper pack.  I also included some of my newer stuff on the layout.  It is always fun to play with the new stuf.  I used the Bohemian Assortment, the stamp set from the Pemberley workshop on the go, and the Florentine stamp set from the workshopon the go.  I also used a chipboard accent leftover from the Miracle kit which I cut in half.  Krista helped me make the title. The inspiration for this layout came from something I pined on Pinerest by Debbie Sanders.
Posted by luv2srap at 2:36 AM No comments: 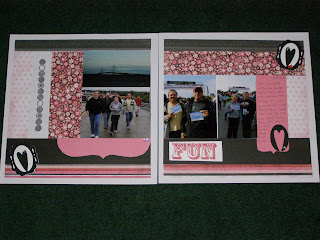 Okay this is my first post so lets just see how it goes.  I made this layout for Kathy's party and since we had to work ( I called in because of the weather, don't tell) I decide to post it.  that way the girls can still see how to do it.  I used the paper pack called Sweet Heart, which is now on sale for three dollars! ( find it under while supplies last section of shopping http://brendamckerchie.myctmh.com/ )  The recipe is from Magic (Close to My Heart how to book). I got to use my Art Philosophy cartridge and my Cricut. Lastly I used the Rock the Block stamp set.  The paper is double sided so if you do not like the colors you can just flip them over and use the other side.  I hope you girls like it and that we can get together soon.
Posted by luv2srap at 2:17 AM No comments: